My husband and I love to do a trip when the kids are away at sleepaway camp. This year we did a mini staycation and went to Boston (we live only 45 minutes away).

I think when you live near a great city (like Boston), you can take it for granted. It’s always just “there”. We go to the museums a few times a year, we go in to see shows, we go to Faneuil Hall and the Aquarium with the kids. Occasionally, we head into the North End (the Italian section for those who don’t live here) and go to the restaurant where we had our first date (Antiquo Forno). When I first moved here in 1989 I did all the tourist spots. So it was a special treat to just go to Boston and walk around. We walked part of the Freedom Trail, we walked to the North End, we walked around Boston Common (Boston’s Central Park), we had dinner, we got caught up in a street festival celebrating St. Aggripina, and we had an overnight in a sweet little boutique hotel that was once known as “Boston’s SkyScraper” in 1889 (the Ames – now owned by Hilton, so we used points and stayed for free).

Saturday Snapshot is hosted by Melinda at awebofstories.com.

See her site for participation details!

My friends over at Smith Publicity send me an electronic copy of the fun middle grade book (grades 4-8) about an intelligent and resourceful young girl, Silent Lee, and her adventures in time travel in Boston.

As if life isn’t already complicated when you have to sneak out a magical side door and enter a different century just to get to school each morning.

And now Silent has to figure out what happened to her beloved Aunt Generous, the woman who raised her–which would be complicated enough even if CIA agents in black SUVs weren’t chasing her–but they definitely are!

This was such a fun read – especially since I live in the Boston area. Even though this title was a stand alone, I know that there are more stories about Silent Lee that are coming!

Thank you for sharing your book with me, Mr. Hiam!

Here is a bit on Alex Hiam, too:

As a child, writer and artist Alex Hiam spent holidays in the mysterious Boston mansion of his great-grandmother on Dartmouth Street. A graduate of Harvard College and UC Berkeley, Hiam was awarded the English Department’s Arnold Prize. But the honor he is most proud of was being entrusted as a student with the key to the iron gates of Mount Auburn Cemetery, where he would let himself in at dawn on Spring mornings to study the migrating birds before the rest of Cambridge awoke. Previously a teacher at the University of Massachusetts Amherst, today he teaches Making Writing Exciting! at North Star, a learning center for self-directed teens. He has sailed the Atlantic, Gulf of Mexico and Caribbean, logging thousands of nautical miles and plans some day to write a book about pirates. Hiam lives with his wife and daughters in an old farmhouse in Amherst, Massachusetts. 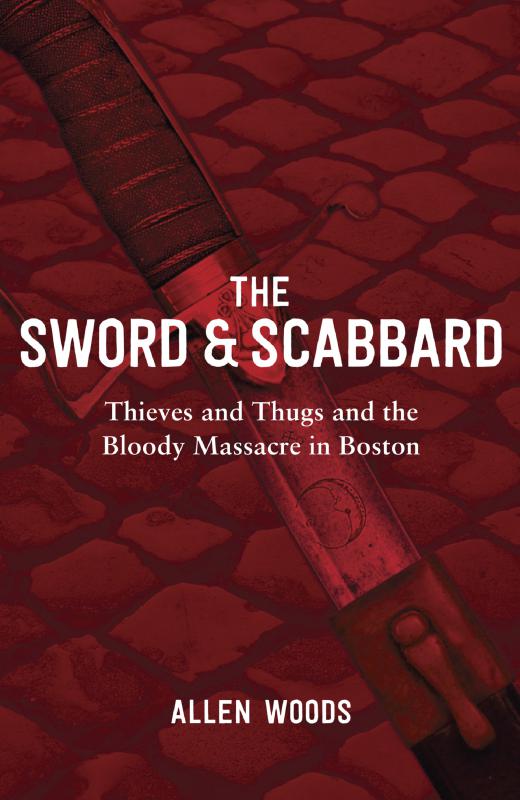 I’m happy today to be taking part in the blog tour for THE SWORD AND SCABBARD – a story of Revolutionary Boston.

Here’s what the publicist has to say:

The Sword & Scabbard: Thieves and Thugs and the Bloody Massacre in Boston

The Real Sons of Liberty:

In every basic U.S. History class, children and teenagers learn about the American Revolution and how the colonists came together to fight unfair taxation by their British counterparts, creating a country founded on the values of freedom, liberty and justice. One of the most notorious events leading up to this revolution was the Boston Massacre, which helped light the spark that fueled a rebellion. But what do we know about the events the paved the way to this historic moment?

The Sword & Scabbard: Thieves and Thugs and the Bloody Massacre in Boston by Allen Woods is the first in a series of novels that answers this question, weaving a story of crime, intrigue and politics to look at an unexplored section of history in a compelling new way.

The streets and taverns of Boston prior to ‘The Bloody Massacre’ were filled with brawls and scrapes, hot words and cold calculations. Nicholas Gray and Maggie Magowan run The Sword and Scabbard, a tavern that is the center of both criminal and political scheming. Each is a fugitive from a dangerous past and their relationship grows fitfully in the midst of historic events. The pair remain suspicious of politicians on both sides of the Atlantic, but are eventually caught in a world where politics and crime meet.

“The road to the Revolution was not a smooth one,” Woods explains. “There were almost constant conflicts within the British and American sides, while many ‘ordinary’ people just wished they could live simple lives without all of the political speeches and protests. But inevitably, they were drawn into the conflict.”

In this thrilling, yet in-depth look at life in the colonies and the onset of the American Revolution, The Sword & Scabbard reveals that:

Allen Woods has been a full-time freelance writer and editor for almost 30 years, recently specializing in social studies and reading textbooks for all ages. The inspiration for The Sword & Scabbard came while doing research for an American history text. He resides in Massachusetts and has been married to his wife, Irene, for over 30 years.

For more information about Allen Woods and The Sword & Scabbard: Thieves and Thugs and the Bloody Massacre in Boston, please visit http://www.theswordandscabbard.com

The Sword & Scabbard: Thieves and Thugs and the Bloody Massacre in Boston is available for purchase at lulu.com, as well as Amazon and Barnes and Noble.

I am reading this book now and really enjoying it. It has the gritty, tough side of Boston in the 1700’s. Life was not easy for those folks and I always appreciate historical fiction that can adequately show both sides of a disagreement. The characters are memorable (and fun, I have to say!). I look forward to more in this series!

If you like historical fiction of this period (American Revolution), then pick this one up today!

Thank you for my review e-copy and having me be part of the blog tour!

Kara Weiss recently  sent me a signed copy of her award-winning book LATE LIGHTS. Here is what her publicist  has to say about it:

About Late Lights. A novella-in-stories about Monty, Erin, and B.J., three childhood friends from Brookline, MA who have grown into three very different people. Each story delves into a different aspect of their lives, exploring the intensely difficult and complicated realities of their experiences. Juvenile detention, illicit sex, violence, and gender. The characters may be young, but the stories are entirely grown up.

Ms. Weiss will be speaking at More Than Words in Boston’s South End on Aug. 28. at 7 PM. This is a non-profit, used bookstore that teaches at-risk teens job and life skills. If you are in the area, stop by and meet and listen to Ms. Weiss!

This past weekend, my husband and I went in to Boston on a little getaway and to see some exhibits. At the MFA we saw the Samurai exhibit: 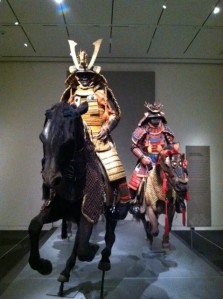 It was quite impressive! I also couldn’t believe the pictures came out as I wasn’t able to use a flash and the lighting was actually low. 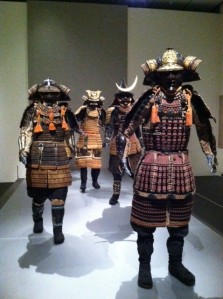 Then we also went to the MOS to see the Dead Sea Scrolls — really fascinating! I wasn’t allowed to take any pictures at all there though.

In keeping with my “odd things in hotel rooms” theme, here’s a picture of the mirror in our bathroom – complete with TV! We got Wimbledon coverage while we brushed our teeth. 🙂 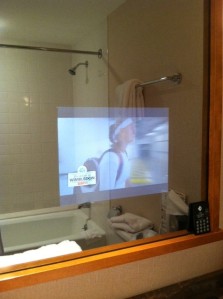 Saturday Snapshot is now hosted by Melinda at westmetromommy.blogspot.com

To participate, post a picture you or a friend took and then link to Melinda’s site. Appropriate content, please!

My brother-in-law (who reads more than anyone I know) recommended this book to me as he thought I would like it. And I have to confess – I listened to it last month and am only just now getting around to reviewing it. Why? Well, first we went on vacation; but that’s really not an excuse. If truth be told, I couldn’t think of much to say.

Here’s the scoop: it’s 1865 and several notable Bostonians gather to discuss literature and Dante in particular, forming “the Dante Club”. I loved this part – I always like books where historical characters come to life (as long as they are done appropriately). A serial killer starts terrorizing the city and the clues are linked to Dante’s Inferno, so the club must put their heads together to solve the mystery and stop the killer.

Here’s where I started to have problems. I love mysteries, but I do not like really graphic stories. Some of the descriptions of the murders were so vivid and graphic (the word ‘disgusting’ comes to mind) that I had to turn off the CD player. I also couldn’t have it playing while I drove the kids places as I felt it was too graphic. It reminded me of “Angels and Demons” which I found vividly repulsive.

Here’s my other problem with the story: I kept zoning out. Now perhaps we can blame the suburban Boston traffic, or my general fatigue, or the fact that I was mentally composing what I needed to get at the grocery store, but bottom line: I missed a lot of this story as I wasn’t riveted.

At first I loved the narrator, John Siedman, and was impressed in how he could change his voice to make each main character unique (Oliver Wendall Holmes, Lowell, H.W. Longfellow, J. T. Fields, etc.). However, as with every book I listen to that takes place in Boston, I always cringe when they do the accent. Here’s the scoop people: the Boston Brahmins did not – nor will they ever – pronounce “Harvard” as “Hah – vid” . “Haw – vud” is much closer. That’s all I’ll say, but just trust me on it.

I’d be curious as to whether any of my readers have read Pearl’s books and if you liked/disliked them. I am wondering whether I should try another.

(I got mine from the library!)

I’m always on the lookout for a good Kindle freebie, so I was excited to find this cozy on Kindle for *free*! This is the first of the Nell Sweeney historical mysteries by P B Ryan. Nell is a feisty young Irish woman, living in Boston just after the Civil War. Nell becomes the governess to the wealthy Hewitt family and helps their opium-addicted eldest son – once believed dead but now accused of murder.

I liked this historical cozy – though I felt it dragged at times in the middle of the novel. I always like a strong heroine and, living near to Boston, I enjoy reading about the city. This is the first in a series (formerly called the “Gilded Age Mysteries”).