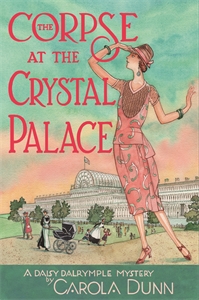 When I discovered this title on Net Galley, I had never heard of Daisy Dalrymple and this absolutely delightful cozy mystery series that takes place in England in the 1920’s. I love the cast of characters in this novel, which includes more than just the intrepid Daisy, but also her friends and children. While this is part of a series, it can certainly stand alone (it did for me!). I will definitely go back and read earlier installments in this well-written and plotted series; and I will look forward to new ones.

Thank you for my review copy! Description is below and a bit on the real Crystal Palace (which I had never heard of perhaps because it burned down in 1936) is at the end, compliments of You Tube.

April 1928: Daisy Dalrymple Fletcher is visited in London by her young cousins. On the list of must-see sites is the Crystal Palace. Discovering that her children’s nanny, Nanny Gilpin, has never seen the Palace, Daisy decides to make a day of it—bringing her cousins, her 3-year-old twins, her step-daughter Belinda, the nurserymaid, and Nanny Gilpin. Yet this ordinary outing goes wrong when Mrs. Gilpin goes off to the ladies’ room and fails to return. When Daisy goes to look for her, she doesn’t find her nanny but instead the body of another woman dressed in a nanny’s uniform.

Meanwhile, Belinda and the cousins spot Mrs. Gilpin chasing after yet another nanny. Intrigued, they trail the two through the vast Crystal Palace and into the park. After briefly losing sight of their quarry, they stumble across Mrs. Gilpin lying unconscious in a small lake inhabited by huge concrete dinosaurs.

When she comes to, Mrs. Gilpin can’t remember what happened after leaving the twins in the nurserymaid’s care. Daisy’s husband, Detective Chief Inspector Alec Fletcher of Scotland Yard, finds himself embroiled in the investigation of the murdered nanny. Worried about her children’s own injured nanny, Daisy is determined to help. First she has to discover the identity of the third nanny, the presumed murderer, and to do so, Daisy must uncover why the amnesic Mrs. Gilpin deserted her charges to follow the missing third nanny.

Here’s a glimpse of the original Crystal Palace (with sad Beethoven music):

And here’s a video from the V&A Museum with no sound that shows how it was built:

I also found this video about the walkway that used to lead to it from the subway – interesting!