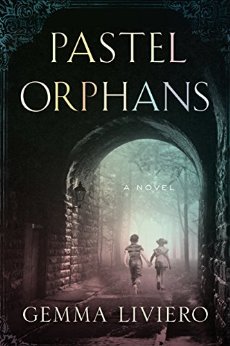 In 1930s Berlin, young Henrik, the son of a Jewish father and Aryan mother, watches the world around him crumbling: people are rioting in the streets, a strange yellow star begins appearing in shop windows, and friends are forced to move–or they simply disappear.

After his father becomes gravely ill, Henrik and his little sister, Greta, are taken by their mother to Poland for safety. However, not even the pastoral surroundings of their new home can protect them from the terrors of war. When the Nazis invade and Greta is kidnapped, Henrik must shed his youthful innocence and search for his lost sister, a quest that will further reveal a harrowing landscape of violence and struggle but also unexpected connections.

Uniquely told from the perspective of youth plunged into adult chaos, Pastel Orphans is a coming-of-age story that explores profound lessons in self-belief, kindness, and human endurance. (from Amazon)

A long time ago my sister recommended this book to me, and so I was thrilled when it popped up as a kindle deal a few months ago. If you read me you know I LOVE WWII fiction. This was one of those books that I could not put down. I had never come across a storyline that involved this horrible bit of history – the kidnapping of Polish children to bring them into Aryan families and raise them as German, “Germanization”.

This was a heartfelt story, told from Henrik’s point of view, and one that you won’t soon forget.