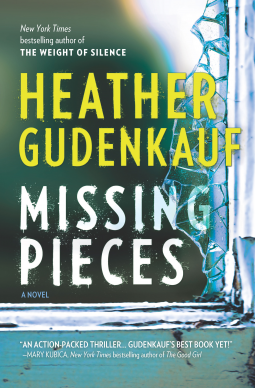 I recently came across this mystery thriller on Net Galley and read it in two days over the holiday break!

Here’s the description from Net Galley:

Sarah Quinlan’s husband, Jack, has been haunted for decades by the untimely death of his mother when he was just a teenager, her body found in the cellar of their family farm, the circumstances a mystery. The case rocked the small farm town of Penny Gate, Iowa, where Jack was raised, and for years Jack avoided returning home. But when his beloved aunt Julia is in an accident, hospitalized in a coma, Jack and Sarah are forced to confront the past that they have long evaded.

Upon arriving in Penny Gate, Sarah and Jack are welcomed by the family Jack left behind all those years ago—barely a trace of the wounds that had once devastated them all. But as facts about Julia’s accident begin to surface, Sarah realizes that nothing about the Quinlans is what it seems. Caught in a flurry of unanswered questions, Sarah dives deep into the puzzling rabbit hole of Jack’s past. But the farther in she climbs, the harder it is for her to get out. And soon she is faced with a deadly truth she may not be prepared for.

Okay — this was one story that you had to pay attention to, because things kept changing! There were a lot of twists and turns, with new information being discovered that would change the way you thought about the characters.

There were a few things here that I had to suspend my disbelief for — (SPOIER ALERT) for instance, there was a lot of upset about needing a lawyer and the person couldn’t afford one (I may be wrong, but I’m pretty sure a lawyer is provided for you by the courts if you can’t afford one – it’s part of the Miranda rights, right?). Also, this woman found out some things about her husband and her first impulse was “wow – he kept this a secret for 20 years? I can’t be married to him anymore”. If I discovered my husband had a secret past I think I would say “We need to sit down and talk about this” long before I’d start planning to divorce him. My biggest issue was that there was a prior murder in the story and an assumed murderer who was just that: assumed to be the murderer – to the point where everyone felt the case was closed. Of course that murderer was missing, there was only circumstantial evidence, etc. but everyone – even the law enforcement – referred to him as the murderer until he ends up dead and decayed. I really think in real life that police officers don’t just say “well, it must be that guy we can’t find” — or at least I HOPE they don’t do business that way!

All criticisms aside, I really did like this story. It was fun and kept me guessing and I couldn’t put it down. The bottom line is – if I don’t like a book, I don’t finish it, and if I don’t finish, I don’t review. I definitely finished this one!

Thank you, Net Galley and Harlequin, for my review copy!