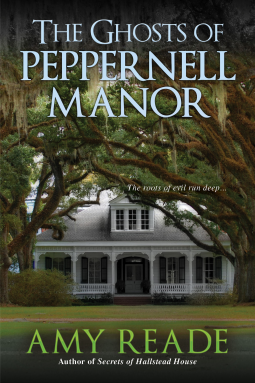 I snagged this one from Net Galley since I’m a sucker for a good ghost story. Carleigh Warner and her preschooler Lucy head to Charleston, S.C. to work on restoring a friend’s family home. Carleigh is regrouping after a divorce and starting a new life. Carleigh moves in with the Peppernell family in their manor house, but soon finds out that there is a resident ghost – Sarah, a former slave on the plantation – who does not want the house restored. Things start to get out of control when two family members die and Carleigh’s work is destroyed. Is it the ghost? Or is something else afoot?

I enjoyed this light read (sounds funny to say it’s light with two murders, but it felt that way). That said, there were some things that jumped out at me that did not work for me. Occasionally I felt the writing got bogged down by exposition (for instance, in one place, late at night, the phone rang. Then there were a few sentences about how Carleigh had never heard the house phone because people had been using their cell phones, but this wasn’t a cell phone, it was a landline in the hallway. Way too much info on something I could care less about — it ruined the tension of a late night mysterious phone call). I also was puzzled about the murders. SPOILER ALERT – – one person had a heart attack and died but poison was found in their system. The attitude seemed to be: well, they died from the heart attack, so whatever… Then another person is killed violently and no one seems to make even a vague connection between the two deaths. Then a work colleague is “charged” with the murder of the victim based on the fact that he had an argument at work with him and had a domestic violence charge on record from his past. What?? Of course there was a clear explanation for both these deaths that came out at the end of the book.

That said, I liked Carleigh’s character (though I had some reservations about her lying to her ex about things that impacted their daughter’s care) and I wanted her to succeed. I would have loved a lot more info on the ghost. Why didn’t she want the house restored? There was mention of her having a child at 15 – what was the story there? Why wasn’t she at rest? And I could have done with a lot less of Mrs. Peppernell who was so arrogant and stuffy that she felt like a cliché. At the end there was a tidy wrap-up with mystery solved, but I would have liked to hear one more time from Sarah.

Thanks, Net Galley, and Kensington Books for my copy!

3 thoughts on “Review: THE GHOSTS OF PEPPERNELL MANOR by Amy Reade”