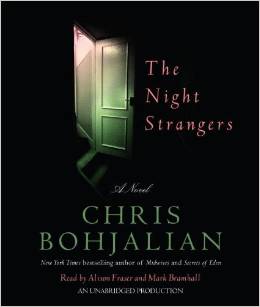 Chris Bohjalian is one of the most versatile authors I know. Each thing he writes is unique and quite different from his other works. As I loved his THE LIGHT IN THE RUINS and CLOSE YOUR EYES, HOLD HANDS, I pulled this from the library audio shelf (as I’ve mentioned before, I spend a LOT of time in the car).

THE NIGHT STRANGERS reads like a classic Stephen King novel – normal people with extraordinary happenings that are ghostly in nature. The novel starts with a plane crash. Told from the point of view of the pilot, the writing was so accurate and tense that I actually started crying as I was driving down the road (okay – my husband was travelling to Europe that day, so I might have been a little over-sensitive about plane crashes). The story is then told from both the pilot’s point of view — interestingly, using the second person “you” for narration — and the wife’s and daughters’ points of view. The narration on this audiobook is done by a man and a woman for these respective parts.

The plot in short is that the pilot survives his crash, but 39 passengers and crew do not. His family moves to a New Hampshire farmhouse to try to pick up their lives. Chip is still suffering. When he finds a strange door in the basement – with 39 bolts on it – he becomes a bit obsessed with discovering what lies in their basement. Meanwhile, wife Emily befriends the local neighbor women – who happen to be into witchcraft, herbs, and a few other things. Their twin daughters, Garnet and Hailey, are doing their best to adjust to fifth grade in their new town and school. Things start to spiral out of control when supernatural events start occurring and the friendly neighbors reveal their not-so-friendly agenda.

I enjoyed listening to this book. As always Chris Bohjalian is a gifted writer. He’s amazing. That said, I didn’t love his choice of ending – but again, it had that classic “horror” feel to it (sort of a “The Shining” meets “Salem’s Lot”). I just always like a “good guys win” ending! 🙂

Ably read by two distinct voices, this was one audiobook that made me not mind spending extra time in the car!

One thought on “Audiobook Review: The Night Strangers by Chris Bohjalian”