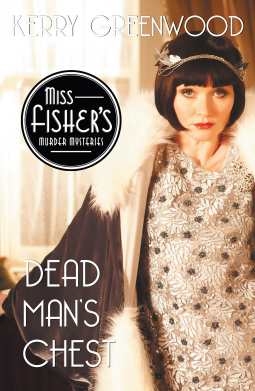 I love watching Miss Fisher’s Murder Mysteries on PBS. Phryne is definitely in a class by herself. And the costumes are to die for — very Downton! I was thrilled to find a Miss Fisher mystery on Net Galley. I have read other mysteries of favorite shows, but this one was different. It gave a greater depth to the characters and spent a lot of time in character development. There was a mystery, of course, and lots of twists and intrigue, but overall, it was a very solid and pleasant story.

Traveling at high speed in her beloved Hispano-Suiza with her maid and trusted companion Dot, her two adoptive daughters Jane and Ruth, and their dog Molly, Phryne Fisher is off to Queenscliff. She’d promised everyone a nice holiday by the sea with absolutely no murders, but when they arrive at their rented accommodation that doesn’t seem likely at all.

An empty house, a gang of teenage louts, a fisherboy saved, and a missing butler and his wife seem to lead inexorably toward a hunt for buried treasure by the sea. Phryne knows to what depths people will sink for greed, but with a glass of champagne in one hand and a pearl-handled Beretta in the other, no one is getting past her.

If you enjoy the series on PBS (haven’t watched it? start now and thank me later!), you will enjoy this novel full of favorite people and fun!

Thank you for my review e-copy!

Where Rainbows End by AnneMarie Brear

Can she hold on to her dreams…?

It’s 1850 and the Noble family have travelled to the other side of the world to start a new life after scandal drove them from their native England.

Pippa Noble is determined to reclaim their honour by making her father’s plan for an outback farm reality, although her ambition is frowned upon by a society that has very set ideas about a woman’s place…

Pippa learns the hard way about the unforgiving nature of the bush, sometimes with devastating consequences. And when unfortunate circumstance leads to Pippa tending the farm alone, it is the friendship of neighbouring estate owner Gil Ashford-Smith that helps her through.

Then an unexpected visitor from England arrives, putting Pippa’s dreams in jeopardy. But she refuses to let go. She will hold onto her family’s land, even if it means losing everything else…

“A compelling story of a headstrong woman who defies the traditional female role and forages a successful life through hard work and a strong vision. Excellent descriptions of the outback and the hardships of life in Australia in the 1850’s.” – Amazon Review

You can purchase Where Rainbows End in eBook via: 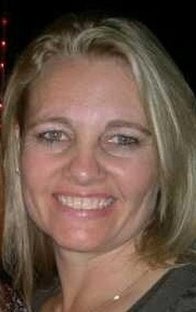 AnneMarie has been a life-long reader and started writing in 1997 when her children were small. She has a love of history, of grand old English houses and a fascination of what might have happened beyond their walls. Her interests include reading, genealogy, watching movies, spending time with family and eating chocolate – not always in that order!

AnneMarie grew up in Australia but now lives in the UK. 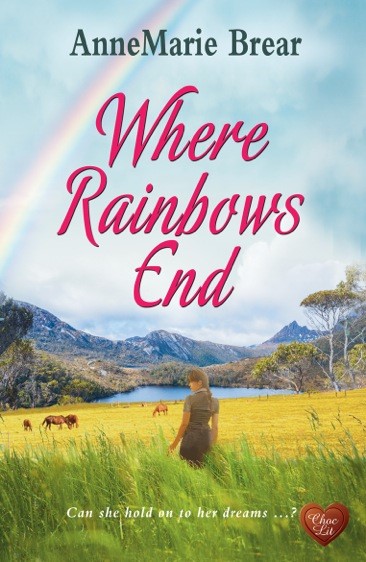 So Many Books, So Little Time
Friday, June 2
A Chick Who Reads

History From a Woman’s Perspective
Friday, June 9
A Literary Vacation

I’ve been on a Kate Morton kick lately, started by “The Secret Keeper”. I also loved “The House at Riverton”, but had some problems getting through “The Distant Hours” (I found it too gothic and too much like “The House at Riverton”). Friends had suggested “The Forgotten Garden”, but it was always out at the library. I finally broke down and purchased it for my kindle. I think this may be my favorite of her books.

Similar to her other books, “The Forgotten Garden” moves back and forth in time as we learn the story of Nell, a little girl found on the Brisbane docks by a dock worker and taken home as raised as one of his own. Nell is much beloved by her family, but her father feels he must tell her the truth on her twenty-first birthday: she is not their biological child and she most probably has family in England. Nell is crushed by this news and becomes determined to figure out where she is from and how she ended up on a ship going to Australia. She has vague memories of being taken there as part of a game by “the authoress”, and waiting for her or her mother or father to return for her, but no one did. She also has distant memories of playing in a garden maze and going through to a little cottage where “the authoress” lived.  Nell starts to piece together the story of her life, and travels to England to see where she is from and to see what she can learn. However, she unexpectantly “inherits” her granddaughter, and her plans are put on hold. Eventually, time passes and Nell does not return to England; her granddaughter, Cassandra, grows up, and Nell decides, as she is dying, to tell Cassandra her secret so that she can figure out the rest of the story. Cassandra then travels to England to figure out the mystery of who her grandmother really was.

I loved reading this story, which switched viewpoint and time period often. At points we were with Nell in the 70’s. Some times we were in present day. Some times it was a young girl, Eliza’s, story from the turn of the century – or Eliza’s story when she was living at the manor in 1910. As the book progressed,though, the viewpoints and storylines converged into one, and at the end, all the questions were answered. Of course a forgotten garden plays a large role here – complete with all that symbolizes!